After more than twenty-one long weeks and a lot of chicken drama, we’ve begun to get eggs.

When chickens first start laying there is a lot of abnormality for the newly maturing ladies.

Our very first egg was a soft shelled egg that had broken on the pine shavings when laid, and it looked as though the chickens ate the insides a bit, so there wasn’t much to take a picture of. But after a few more days our girl Rose laid us the beauty you see above and below.

We couldn’t get Rose to look up for a picture, but she was very proud. She sang the loudest egg laying song ever to announce she was going to lay right before she did, so I was able to get her egg still warm from the nesting box!

The next day we found two more soft shelled eggs. I think they were laid by Tulip and Marigold, but I’m not positive as they were there at dawn when I let the hens out of their coop. It was wet and rainy that day, as you can see by how wet my hand is in the picture below. 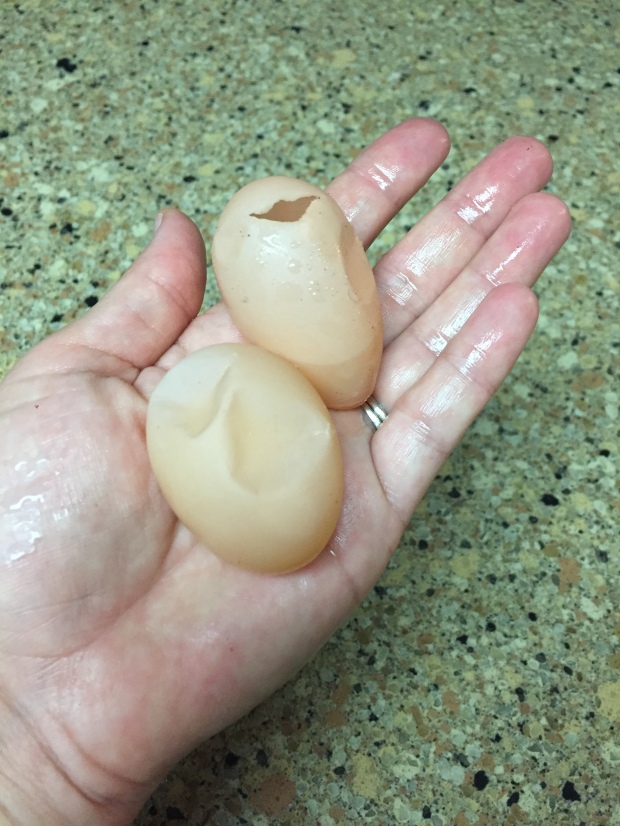 You can see what I mean by soft shells. They are literally soft and the one on the right also had been punctured slightly by the shavings. I brought them in though and opened them up to see what was inside.

The one on the left was completely whole, with no punctures and you can see it is a beautiful (no filter) egg with all its whites and what have you. I actually pinched and pealed away some skin to break the egg open. The one on the right was the one that had been punctured by the shavings. I ripped it open and you can see that it lost most of its whites.

I’m sure you can eat these soft shelled eggs, but I just didn’t think I wanted to, so I ended up scrambling them and feeding them to the chickens.

The next day we got another regular hard shelled egg. All of these eggs have been pretty small but they were from my very own chickens. So two eggs seemed pretty good for the next days breakfast.

So when I went out at dawn again, I found a soft shelled egg, and then a few hours later I found a third hard shelled egg. This one was in the run, I don’t know what’s going on there, but we now had three small eggs. So this morning I fried them up!

Three small eggs! Look at those beautiful yolks! And I love how the light makes a gold ring around the inner edge of the pan in the bacon grease. It reminds me of an eclipse!

The eggs were divine. We are so happy our girls are growing up. I’m pretty sure we are still waiting on two more girls to even begin laying, as they do not have many of the maturity signs. Things such as bright red combs and waddles, squatting for me when I get near, and going in and out of the nesting boxes. But as the days get cooler and shorter I am interested to see how our girls provide for us.

Here are all the ladies in my little make-shift “chicken playpen,” so they can free range without leaving our yard or going in my garden beds. It only sort of works. LOL

I'd love to hear a peep out of you: Cancel reply